I had the chance to visit Death Valley this spring. I loved exploring the desert, camping and backpacking throughout this vast park. The wildflowers were out-of-this world, adding a splash of colour to such a tranquil landscape. When I heard about the forgotten Panamint City ghost town I was really excited to make a backpacking trip to see it but I had no idea what sort of hike I was in for.

The “trail” to Panamint City follows an old jeep road that winds its way up through Surprise Canyon. The road washed out in a flash flood in the 1980s but I figured if there used to be a road, it couldn’t be that hard of a hike. I was quite wrong. Apparently, a lot can change in a few years. The trail now goes right up through the middle of steep slippery chutes while water crashes down, trying to wash you away with it. Death Valley is a very dry place but here I found myself trying hard to avoid stepping in pools of water. Most of the time it was hard to imagine a road ever twisting its way through this rugged canyon.

As you climb up through the canyon you start to see some evidence that, yes, there once was a road. Tools discarded beside the trail here, a rusting tractor tangled in overgrown bushes over there…

After what seemed like hours I finally started to see some evidence of the ghost town. We’d started the hike late in the day and were now racing the setting sun, whose dying light made the bits of ruins I could spot seem quite spooky. We set up camp among the crumbling old houses as darkness descended into the canyon. The following morning brought bright sunlight into the crisp canyon air.

Panamint City itself was a thriving mining town in the 1870s with over 2,000 residents at its peak. How it got there, though, is a rather strange story. Most mining towns start out with a rush of hopefuls jumping on the coattails of long-time prospectors who discover a rich find. Here, it wasn’t prospectors but stagecoach robbers! William L. Kennedy, Robert L. Stewart, and Richard C. Jacobs were hiding out in Surprise Canyon after knocking off a number of Wells Fargo stagecoaches. Hearing that silver had been discovered in nearby canyons, they started looking around. Low and behold, they discovered a lot more than you’d find on any stagecoach! But how to get it out?

Our intrepid stagecoach bandits contacted two Nevada State Senators who agreed to grant them amnesty while purchasing claims for themselves and to pay off what the trio had stolen from Wells Fargo. The senators invested heavily (over $1 million – that was a lot in the 1870s!) while our bandits devised a cunning plan to intercept the growing production of silver which Wells Fargo now refused to transport. The senators were forced to create their own shipping company and our bandits found themselves outwitted. Knowing who they were dealing with, the senators had the silver ore cast into 400 pound cannon balls! Let’s see someone try to steal one of those. 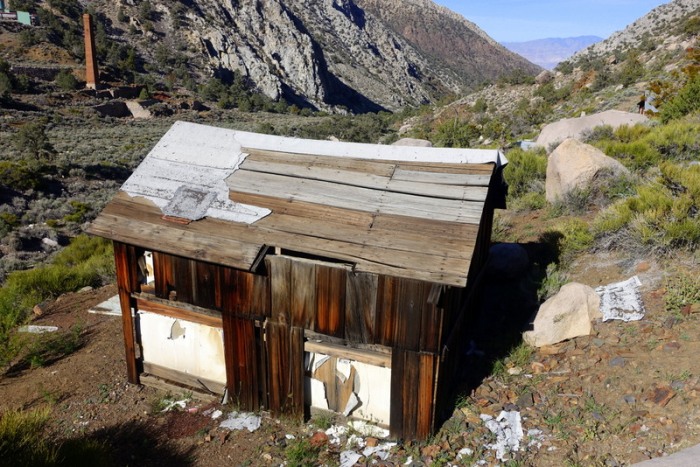 Despite riches pouring out of Panamint City and dreamers pouring in, by late 1875 many of the best veins were played out and people began to leave in droves. Then in 1876 a flash flood washed away much of the town. Another struck again in 1901 (I think I’m seeing a trend here – maybe not such a good place to live).

Sporadic attempts at mining continued up to the 1980s and many of the buildings and vehicles you’ll find here are from the ’50s, ’60s and ’70s but there are many originals too, including the huge smoke stack that dominates the scenery.

Death Valley has some stunning scenery and a rich history. I really enjoyed exploring this vast area and hope to be back again.