Rockwall Trail to Field BC – 75km

Andrew and Nicky dropped me back at the trail at noon, which was actually really good timing as the rain had just stopped. Fresh snow dusted all the peaks to the north.

It’s a big climb from the highway up through an old burn but I enjoyed the mix of bright green young plants and dark charred trees. 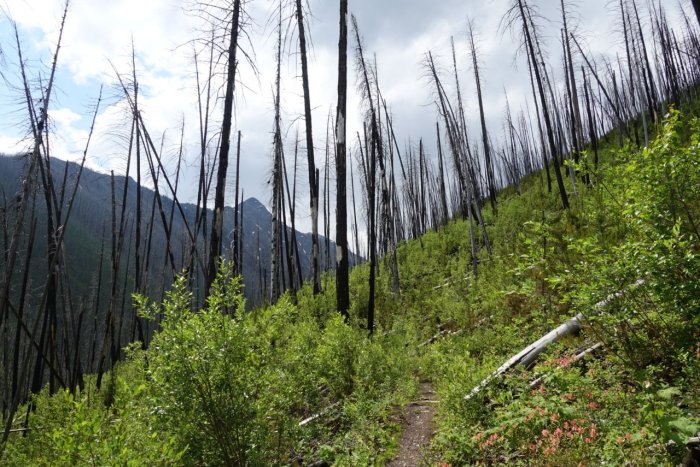 I finally made it to Floe Lake, discovering it mostly still frozen. Despite the ice, I jumped in, washing away the day’s sweat and salt. Nothing like an ice bath to wake you up! 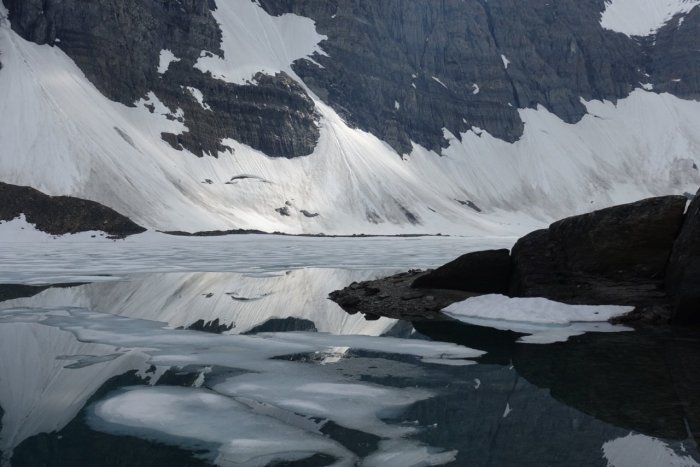 I woke up just as the morning sun began hitting the huge cliffs that guard Floe Lake. The view warmed my heart – but not enough to make me jump back in the lake first thing in the morning! 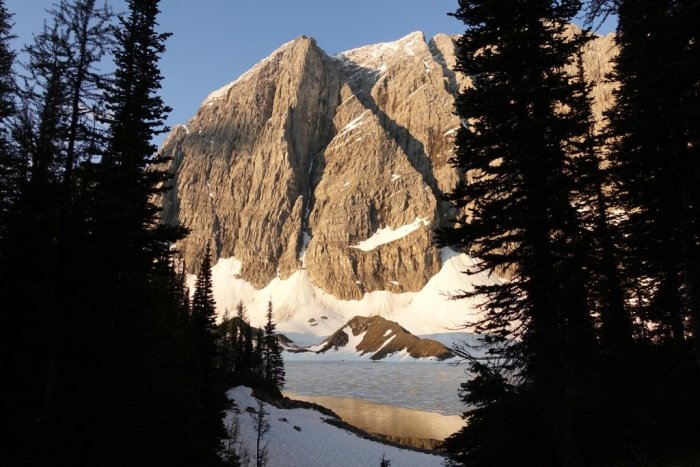 Luckily, it was a fairly cold night and the snow had a good firm crust. I made good time up to Numa Pass. Still looks like winter up here. 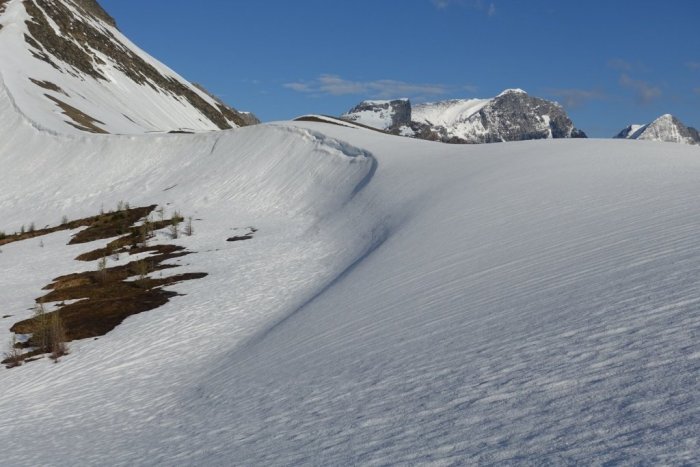 Down at Numa Creek, though, spring was alive and well. These avalanche paths are so vibrant. I called lots in case any grizzly bears might be hiding in the bushes. 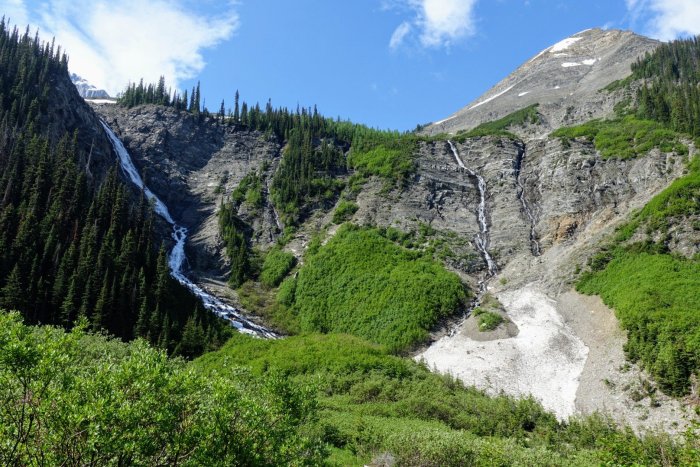 I continued along the trail, heading up over Tumbling Pass. Instead of dropping all the way down to the campground at Tumbling Creek, I made my way across the glacial moraine, still covered in snow. I was a bit worried about crossing the outflow from this glacial lake. Nothing like fast flowing freezing water that’s too cloudy to see how deep it is. Luckily, I managed to cross right at the mouth of the lake where the water was deep but barely moving. 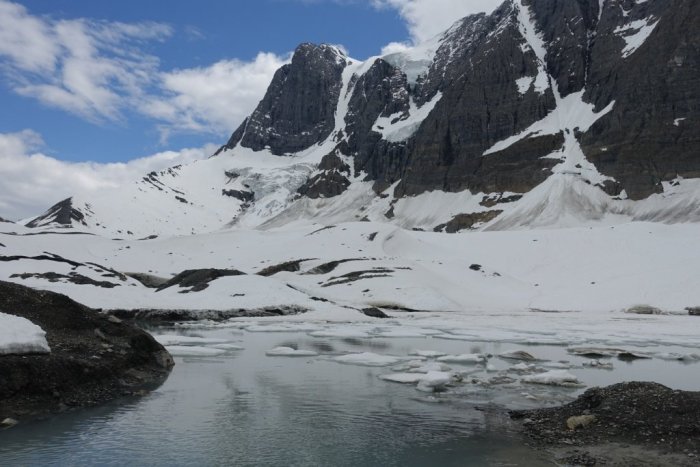 I found a nice spot to camp at wild Wolverine Pass, where enough snow has melted to give lots of good camping options. It started to rain as I was getting the tent up and continued for most of the night. I actually really like camping in the rain. I feel protected in the cocoon of my little shelter. 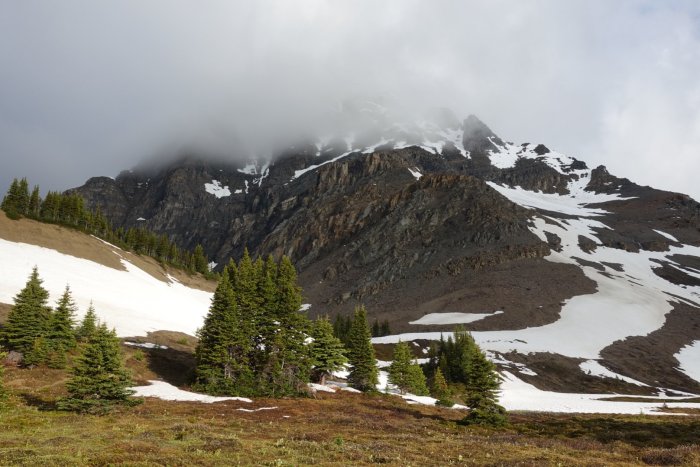 I made my way across more snow, taking advantage of a bit of sunshine before the rain returned. 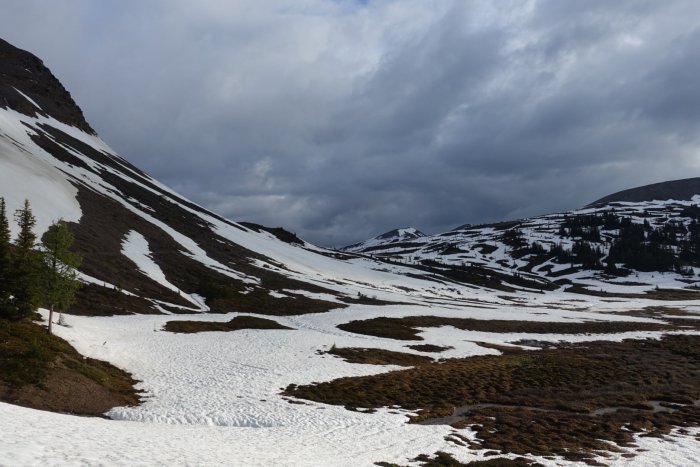 From Wolverine Pass to Rockwall Pass was a fairly quick walk with the snowshoes then there’s a big dip down before heading back up to a broad ridge. The trail goes way around to the right but I decided to head across the moraine again, just like yesterday. In the photo below, I skirted to the left of all the melting lakes. I’m not sure it was actually any faster than taking the trail, but it was fun. 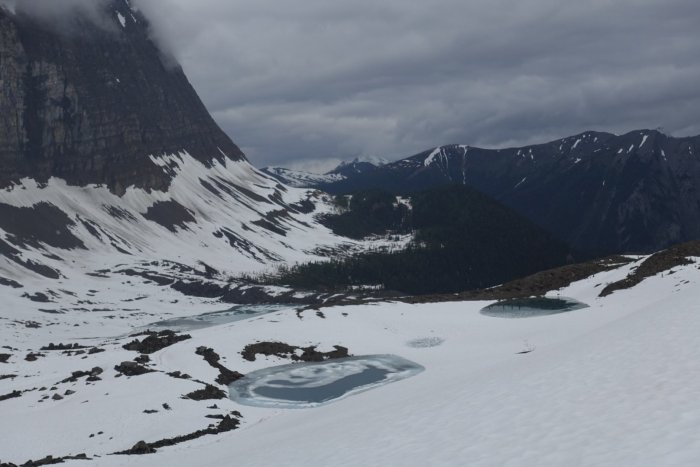 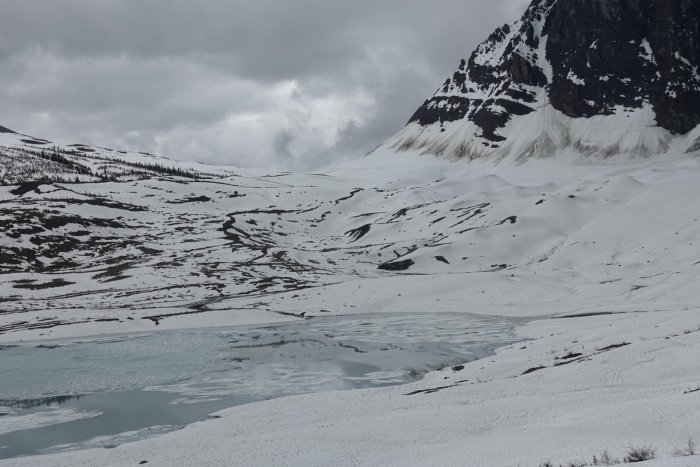 Down at Helmet Falls campground I met an English couple who wanted to make it over the pass I had just crossed to Tumbling Creek and then out to the road. I’m pretty sure without snowshoes there’s no way I would have made it and they were just on foot but I’m glad I ran into them because the bridge from Tumbling Creek to the highway is out and they would have been stuck!

I just had one more pass to do. Goodsir Pass only had about 30 minutes of snowshoeing. When I reached the end of the deep stuff and decided to take off the snowshoes, I actually had a moment of sadness. I’ve been carrying these darn things for a month and can’t wait to get rid of them but I think I’ll actually miss them. 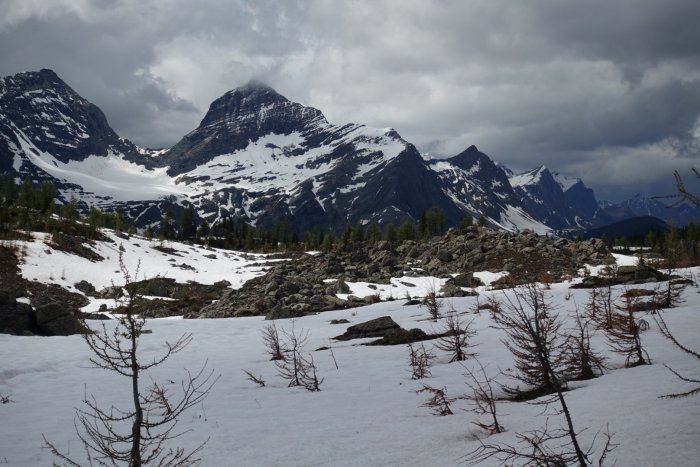 The views descending Goodsir were fantastic. The rain and mist give these peaks such a mysterious feel. 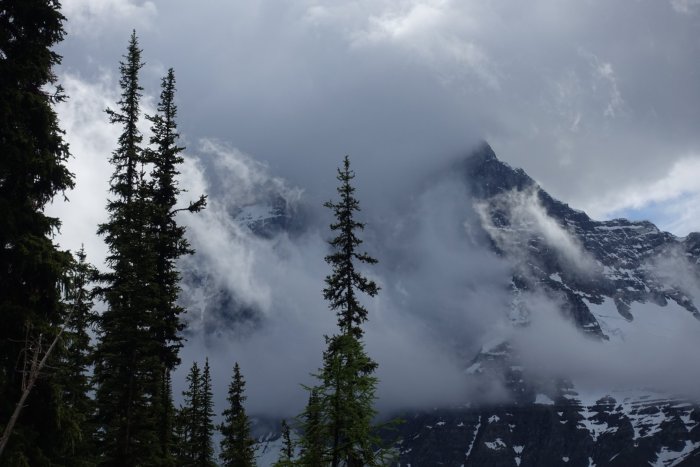 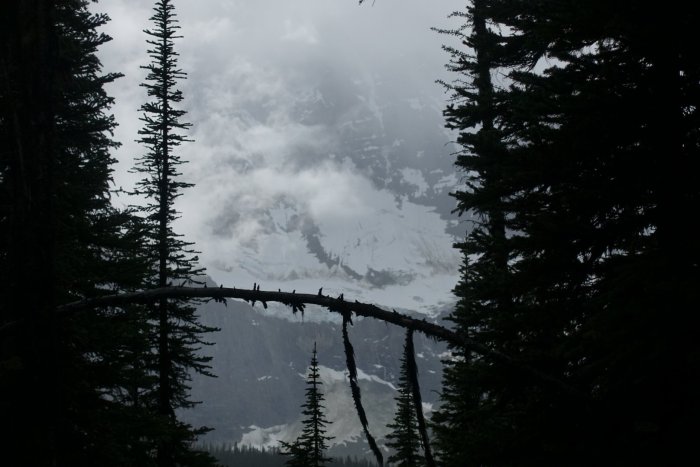 I finally hit good trail. No snow, no postholing, no finding my feet suddenly sunk into slush. Who needs snowshoes anyway? 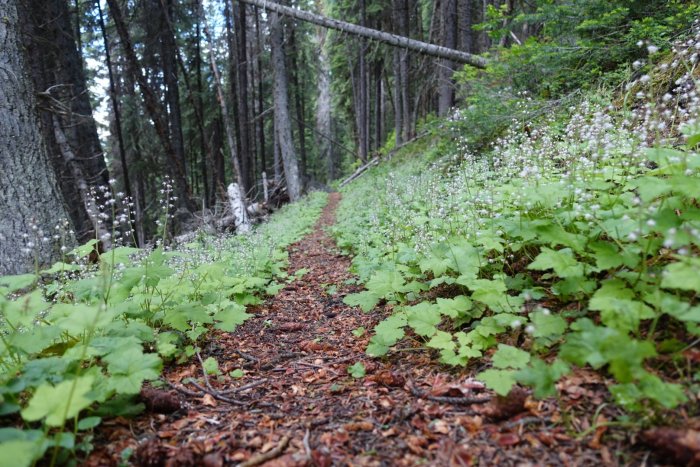 Well, there may still have been a few obstacles on the trail… 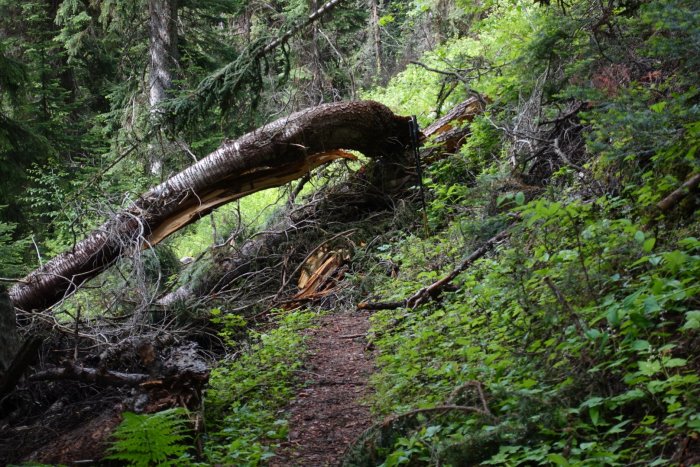 I pitched my tent in a lovely open area with amazing views that lulled me to sleep. 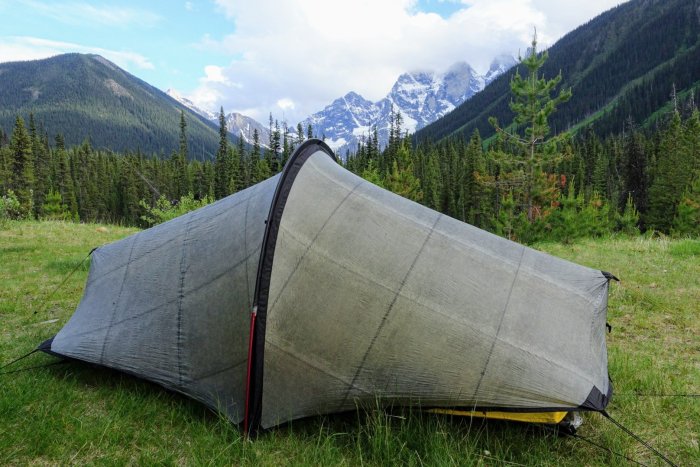 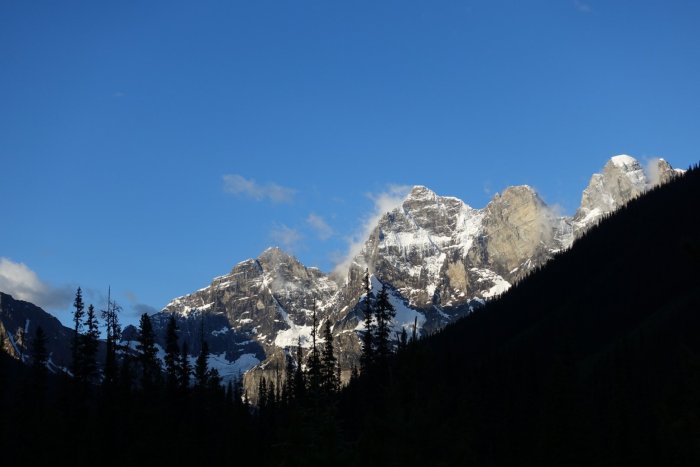 I enjoyed the walk along the Ottertail River, glad I didn’t have to cross this quick flowing river. 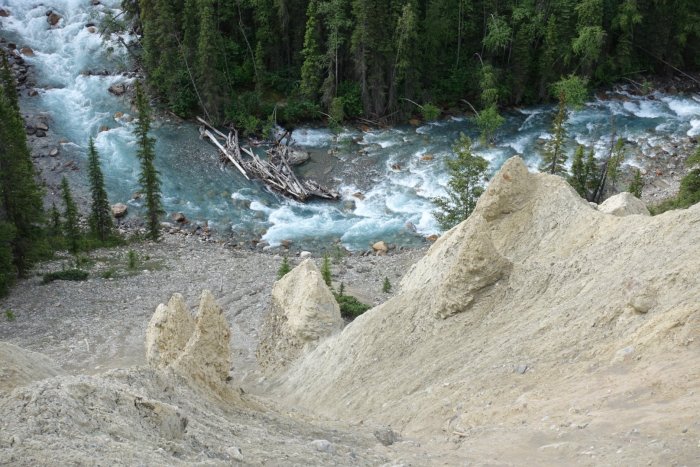 When I got to the road, I had two choices: 7km along the railroad tracks or even longer on paved roads, mostly the highway. I chose the railroad. 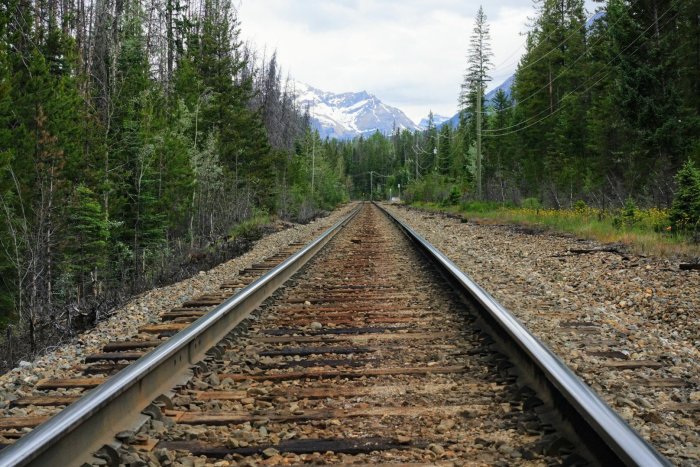 After all the snowshoeing and postholing I’ve done over the last month, the thunderstorms and rain, this 7km ended up being the most stressful of the entire trip. I was constantly listening for a train coming around the next tight bend. I only had to jump into the trees once, covering all 7km in an hour. 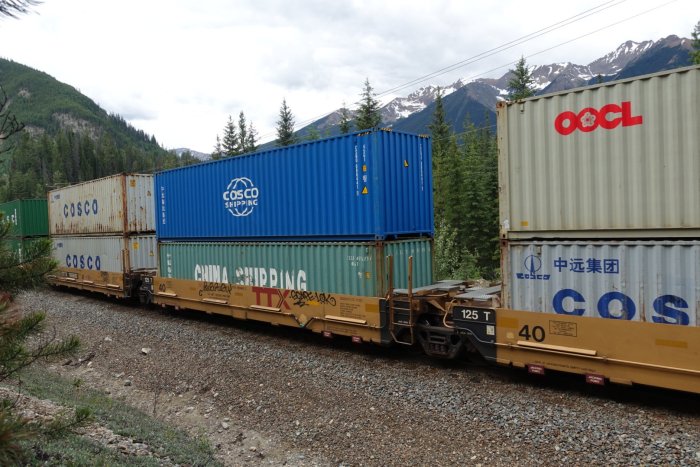 It felt surreal after seeing so few people over the last month and now to pop out at Natural Bridge where hundreds of tourists were snapping selfies at this, admittedly, amazing place. 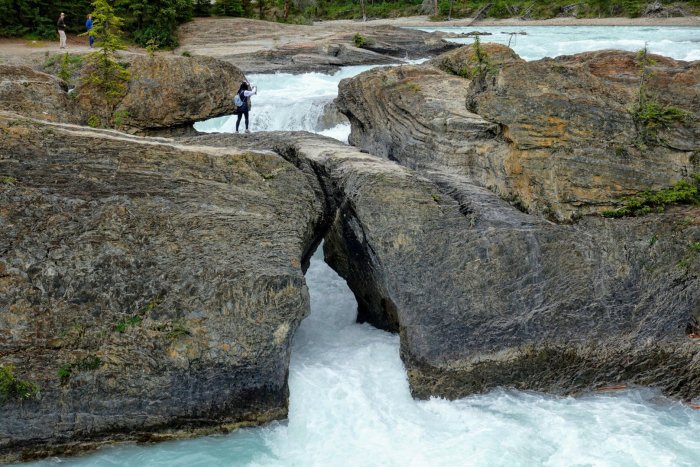 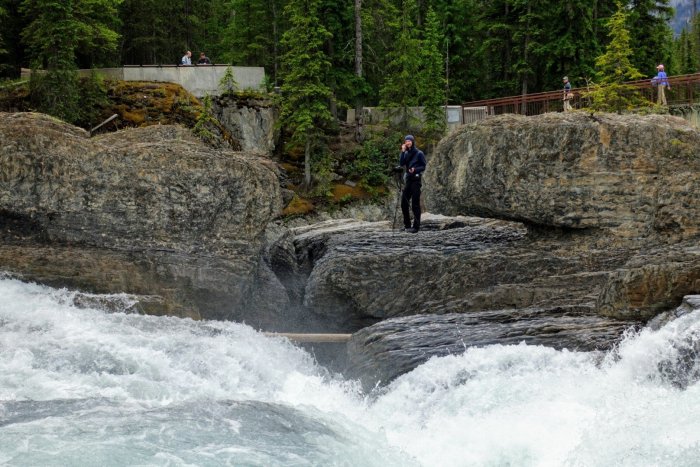 Tara picked me up and drove me into Golden where I’ll stay with her and Dan. They hiked the GDT two years ago, the first ever to do it in both directions in a single year. They’ve been a big inspiration for me, so it’s great to meet them in person. Thanks for the wonderful hospitality guys!

Next Post: Through the Car Wash (Field BC to Saskatchewan Crossing)