I have great memories of hiking the Jasper Skyline Trail with good friends a few years ago. We did it the hard way, starting at the low end of the trail and then dipping down into the Watchtower Basin for a night. Now, as part of my GDT hike, I managed to snag a last-minute spot at Curator Campground. Such good luck. 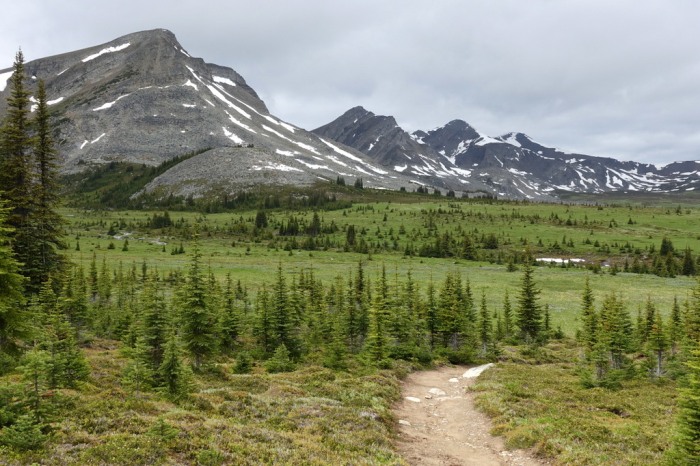 For such a busy trail, I think I saw more wildlife than people. This little guy told me it was his trail and I had better find my own…

The views up here are great. But it was a bit shocking for me arriving at Curator Campground, full of people. Having started the GDT so early, I’ve seen almost no one, so now being on a busy trail is a bit of an adjustment.

July 12 – Squeaking Through the Notch

The Notch is the trickiest bit of the Skyline Trail. A cornice blocks this little bottleneck well into the summer, forcing hikers to skirt high above the snow. You really don’t want to slip here. Just a few days earlier, as I was going over Maligne Pass, nearly everyone turned back at the notch. Too much snow.

Fortunately, a few warm days melted all that fresh snow, making for a fairly easy walk up the Notch.

Once I got to the top, the wind whipped fiercely. Fog drifted by, obscuring the views, but then blew away just as quickly, letting the bright morning sun shine through.

The descent went surprisingly quickly and I was off the trail in no time. Actually, it almost went too quickly. I remember the Skyline Trail being much more grand and difficult. At any rate, the walk into Jasper was nice but my feet were pretty tired after a 36km day, my longest on the trail.

Jasper is a cute town. I prefer it over Banff. Even though it’s popular with tourists, it feels a little more relaxed.

Getting from Jasper to the next part of the GDT, though, is a pain. That’s the problem with long distance trails – the connector bits are often sub-par walking. In the case of the GDT, this means 22km of walking on the busy highway. I decided to try an alternative way that would keep me off the road.

I followed a good trail for a few hours until I had to branch off, making my own way through the forest. The bushwacking was pretty challenging and I even got to scramble up a small cliffy bit, covered in moss.

When I got to Dorothy Lake, I made my way around the shore, sometimes walking right in the lake itself. A big thunderstorm rolled in just as I made it to the far end of the lake. The skies opened up and hard rain poured down. But my timing couldn’t have been better. I discovered a large overhanging cliff just as it began to rain and I stayed completely dry.

My next step in avoiding the highway was searching for a historic tote road hidden somewhere in the forest. Built in the early 1900s, this road was used to deliver supplies to the railroad as it was being built.

For a road unused for 100+ years, I found it surprisingly good and quite nice walking.

After only a few hours I’d made it along the Tote Road, losing it only briefly, and onto the abandoned Grand Trunk rail line. This made for quick, easy and pleasant walking next to the meandering Miette River. 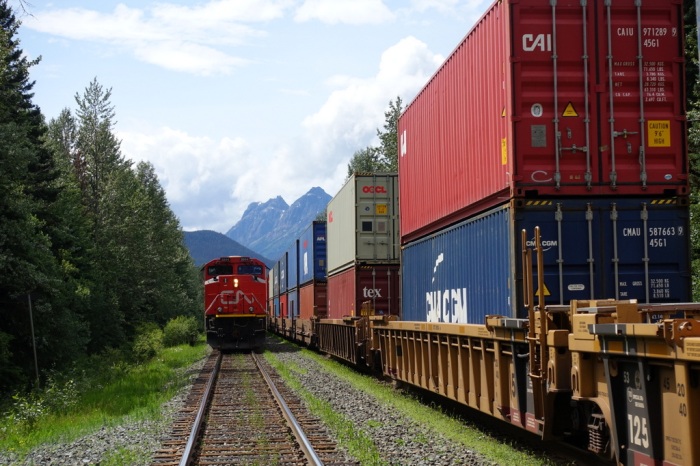 Well, that’s about it for the easy walking. Up next, I head to Mount Robson where the trail can be hard to follow and the river crossings some of the toughest on the entire trail.