From The Hague, we cycle along the coastline to The Hook of Holland, a spit of land at the mouth of a major shipping channel.

The Hook is something of a summer beach vacation spot and we watch with amusement as two teams try to race each other while riding some sort of long inflatable tubes. Every country has its oddities.

It’s a hot day and as we continue cycling, we’re happy to spot a little snack stand. Inside are vending machines selling strawberries and grapes! What a great idea. 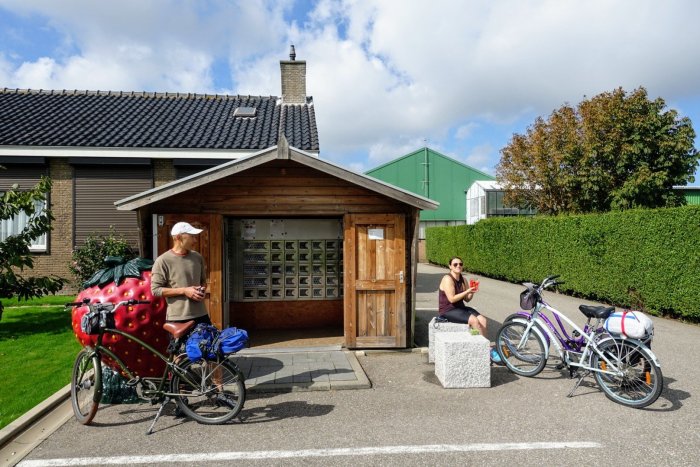 We decide to cycle to Rotterdam but find the pathway blocked due to construction. It’s not hard to get around but we get talking to a local and he suggests that we stay in the little village of Brielle instead. He says it’s one of his favorite places and hardly any tourists go there. Sometimes it’s wonderful not having any plans.

We take our first ferry then cross over a bridge that reminds me a lot of those Escher prints at the museum in Den Haag.

We make it to Brielle and are delighted to find a peaceful little town with a beautiful cathedral and a charming old windmill that now houses a honey shop. How very Dutch.

Charles and I go for a morning walk and discover a little car that someone drove all the way from Beijing to Paris!

Compared to that adventure, it’s a short ride to Rotterdam but a pretty one.

We cycle along glassy canals lined with green trees, imagining what it would be like to live on a boat here.

We’re excited when we get to another sort of drawbridge, this one a huge elevator, allowing big freighter ships to pass beneath. 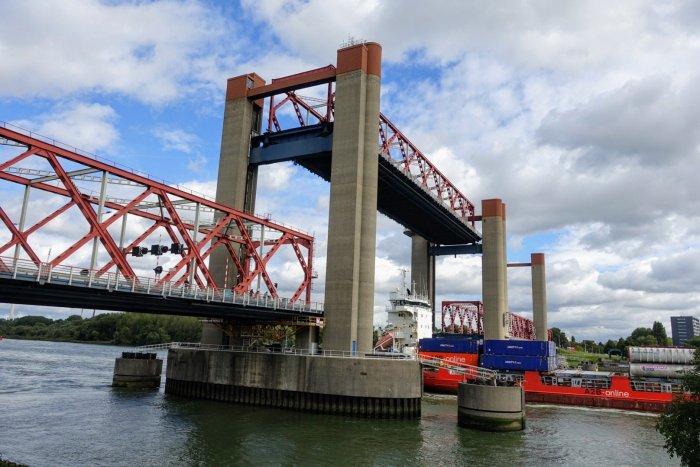 Then, quite suddenly, we’re in a very industrial port area. How quickly the scenery changes. 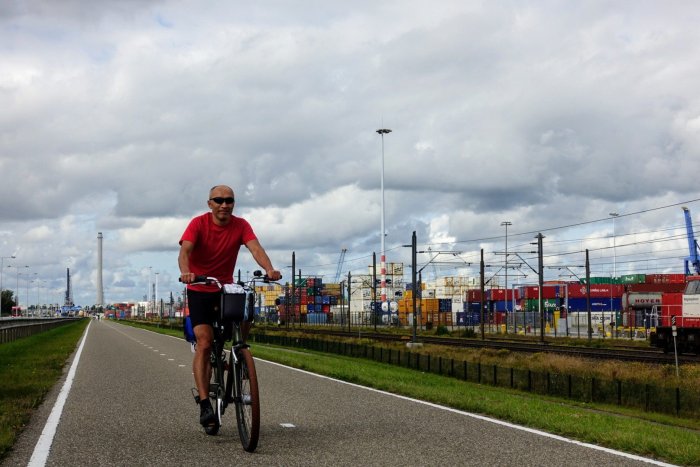 Rotterdam is a major port and a large portion of Europe’s goods pass through this sprawling facility. 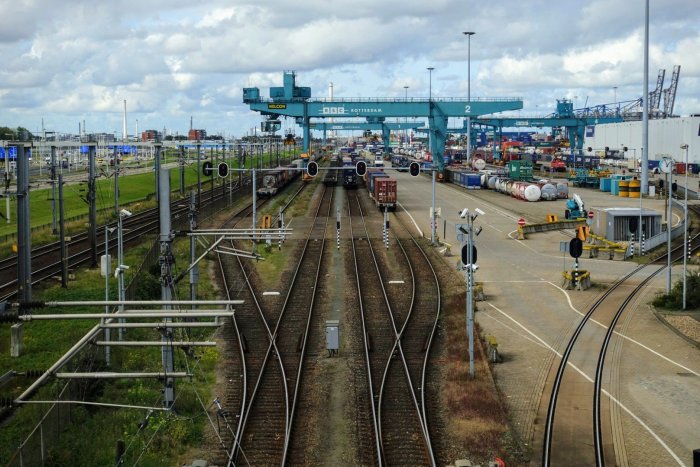 We make it to the city itself to find something very different than we’ve seen elsewhere in the Netherlands. Rotterdam was heavily damaged in WWII. Much of the center was completely destroyed, if not directly from bombing then from the subsequent fire. The city decided to rebuild itself in a new and exciting way. 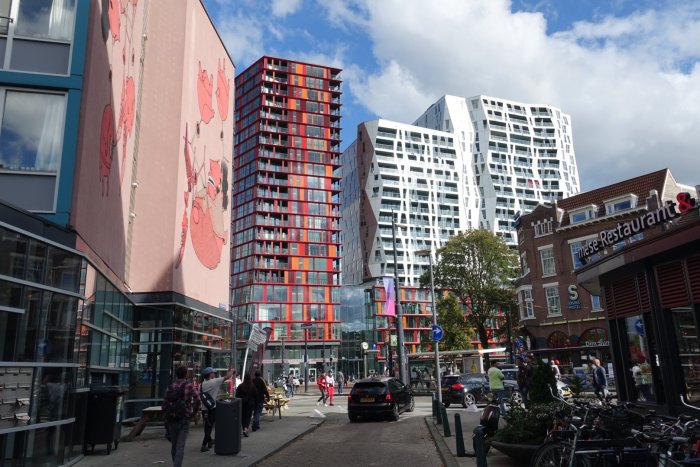 Rotterdam certainly has unique architecture, for example these cube houses, where you can live in a reality rotated 45° to the rest of the world. 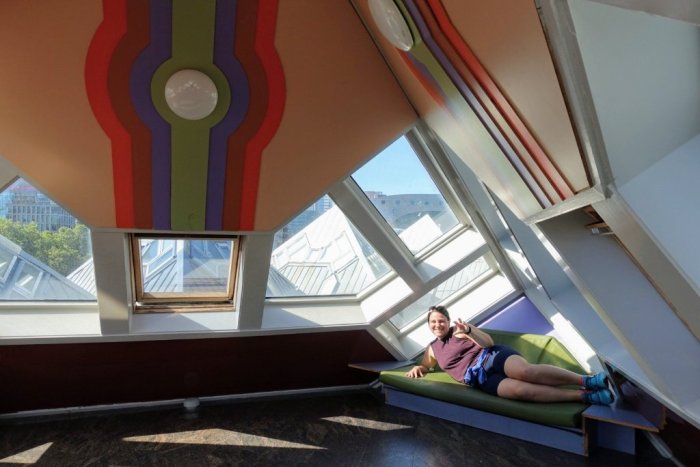 Or the central market, which wraps luxury apartments around a huge assortment of shops and restaurants.

Rotterdam also has its own culinary creations. Take, for example, the quick and cheap “Kapsalon”. This Dutch word actually means Barber Shop and the dish is reportedly the creation of a barber who happened to work next to a kebab shop and who wanted a little bit of everything all thrown together. 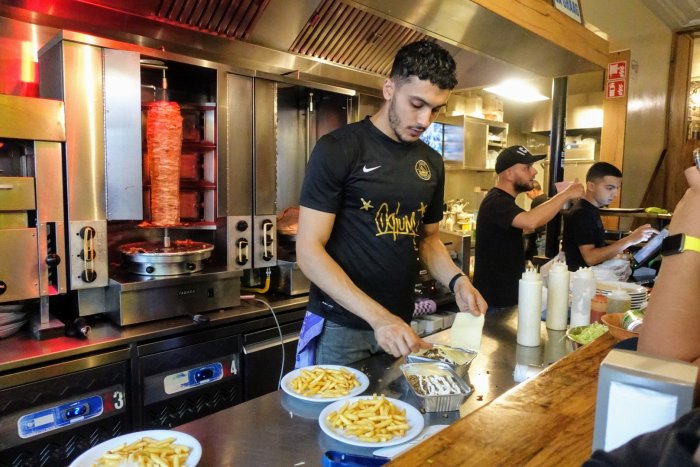 What you end up with is a big plate of french fries (sorry, I mean Dutch fries), donair meat, cheese, and lettuce, all melted together. I thought it was pretty gross but Charles and Sil gulped it down. 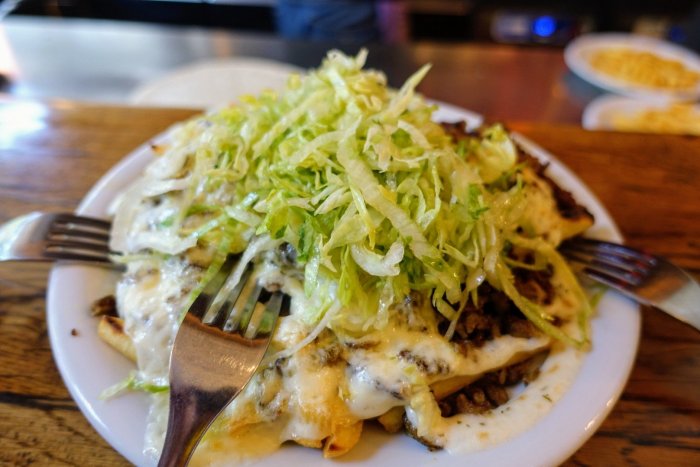 Up next, we go in search of more culinary treats, this time to the home of Gouda cheese…