I’ve just finished a month-long, 1,500-km cycle tour around Tasmania. This remote island is a pleasure to travel by bike with long winding roads that pass through incredible scenery with little traffic. Its diversity is striking. There are vast temperate rain forests, tropical white sandy beaches with turquoise water, rugged coastlines with towering sea cliffs, and peaceful sheep pastures and lavender farms. Tasmania’s history is equally rich. From its notorious convict beginnings to hardy miners who struggled to make a life in the remote corners of this island, there’s so much to learn. Whether you stay in campgrounds or treat yourself to character-rich B&Bs and historic hotels, you’re sure to discover some real gems along the way.

I thought it would be helpful to write a brief guide for anyone planning their own cycling trip in Tasmania. I hope this trip report gives the potential cyclist some inspiration and ideas of where to explore and what to expect. My trip was largely unplanned – I woke up in the morning and decided where to go or perhaps planned ahead a day or two. If I ever do another cycling trip in Tassie, I’m sure I’ll take a different route, so use mine for ideas but I wouldn’t follow it exactly.

My Trip – Day by Day
Accommodations that I especially enjoyed have a link to their website.

How it all got started – In Search of the Tasmanian Devil

King George Sound (Tasman Peninsula) – Airbnb with Jen & George – wonderful hosts who happily share their home, a peaceful spot in the forest with beautiful views of the sea below. It took me about 30 minutes to cycle there from the main road.

Norfolk Bay (Tasman Peninsula) – Norfolk Bay Convict Station – a B&B full of history and character. This house was once used as a base for transporting convicts between Hobart and Port Arthur.

Westerway (Derwent Valley) – Duffy’s Country Accommodation – a relaxing former ranger’s cabin in the country that I just didn’t want to leave. Watch the sheep and cows wander by just outside your door. This is a good base for exploring Mount Field National Park.

Queenstown (West Coast) – Penghana B&B – Once the mine manager’s house, this B&B is full of character and history (see my post here) and the hosts are more than happy to share it with guests.

Road Conditions & Traffic
On the East Coast, near Hobart, and on the North Coast I found the traffic quite heavy. Roads in the Central Highlands and West Coast are less busy. In both cases, the roads are often narrow with little or no shoulder and there are tight turns with limited visibility. The West Coast was better in this respect, having a shoulder more often and generally being wider. People tend to drive fast in Tasmania but most slowed down and gave me space, except for transport trucks, which often barely move over or slow down. 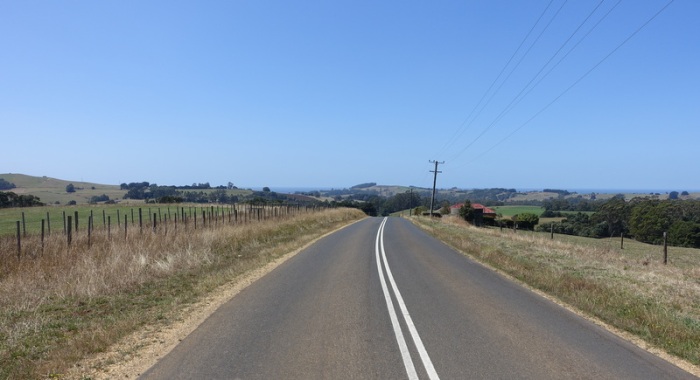 Taking smaller roads, when you can find them, makes a big difference. This sometimes means getting creative with your route, for example going on a gravel road rather than a paved/sealed one. I found that most of the sealed roads were generally in good condition, some even freshly paved. Gravel roads were sometimes rocky with washboarding but not so badly as to make then un-rideable without suspension. These could be challenging with a fully loaded bike. If you plan to spend many days on gravel roads, a bike with suspension would be quite helpful.

Bushfires and Road Closures
Summer (mid-December to February) is bushfire season. These fires can start unexpectedly and move unpredictably. A number of areas I wanted to see had road closures due to bushfires. The smoke can also get quite thick, reducing visibility and making the hard work of cycling a lot less fun.

For up-to-date information on bushfires and road closures, see TasALERT. 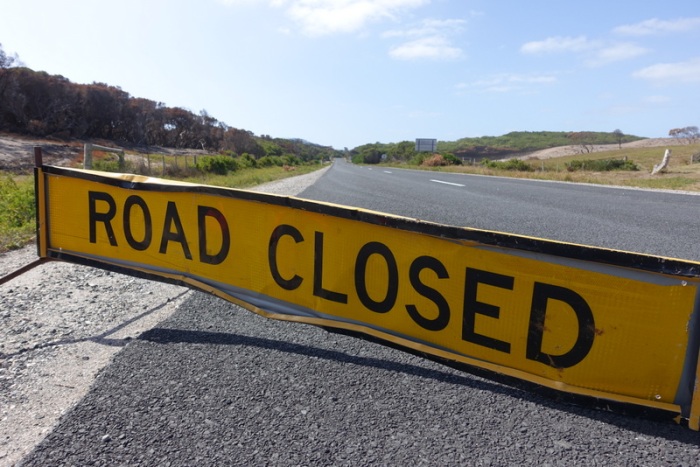 Mobile Phone Service
Telstra is the only network that works outside of the cities and towns in Tasmania. On the East Coast I found that reception was good in most places. On the West Coast there were long stretches without any reception when away from the towns.

Where to Stay
I had no set route or itinerary in mind and just took it a day at a time. I stayed in a combination of B&Bs, old character-filled hotels, hostels, and with friends. Often, we just showed up in a town and took whatever was available (sometimes, the very last room). Sometimes we reserved a day or two ahead. This worked well everywhere except for Coles Bay, where we ended up in a large house that was perfectly nice but way more than we needed and rather expensive. Book ahead for Coles Bay if you’re not camping. 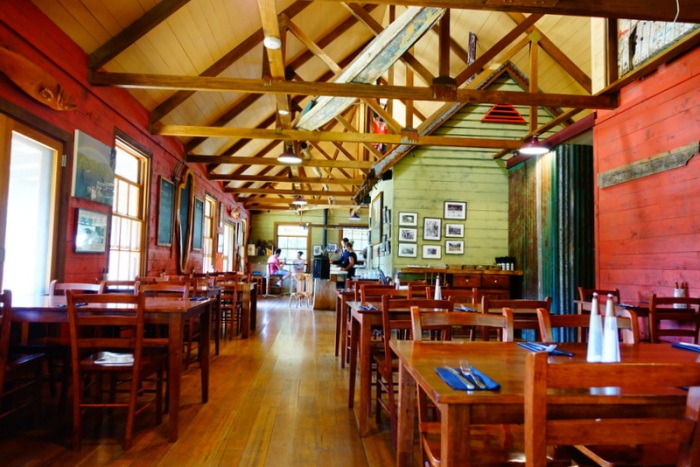 Weather – Wind, Sun, and Rain
Tasmania’s weather is very changeable. I found most days hot, yet the very next day could be quite chilly. Near the sea it is usually cooler than inland and there is often a strong breeze. Sometimes the wind coming off the sea was very strong, making it difficult to cycle at a reasonable speed. The sun is especially intense this far south. Sunscreen is essential. Tasmania is known for rain, especially the West Coast. I must have visited in an unusually dry year as it only rained twice while I was cycling and not hard enough or cold enough that I needed a rain jacket.

Clockwise or Counterclockwise?
I cycled clockwise around Tasmania. An advantage is that this puts you on the same side of the road as the sea, so you get the best views when you’re along the coast. A disadvantage is that the prevailing headwinds come from the west, so you’ll be heading straight into them as you cycle from Hobart to the West Coast. I must have been lucky as I had very little wind on this part of the trip.

East Coast or West Coast
Go to the East Coast for convict history, small town charm, and easier cycling. Go to the West Coast for nature, mining history, and challenging cycling. They’re both great experiences and I’m happy I had the opportunity to visit each of them. If you have the time, why not do both? 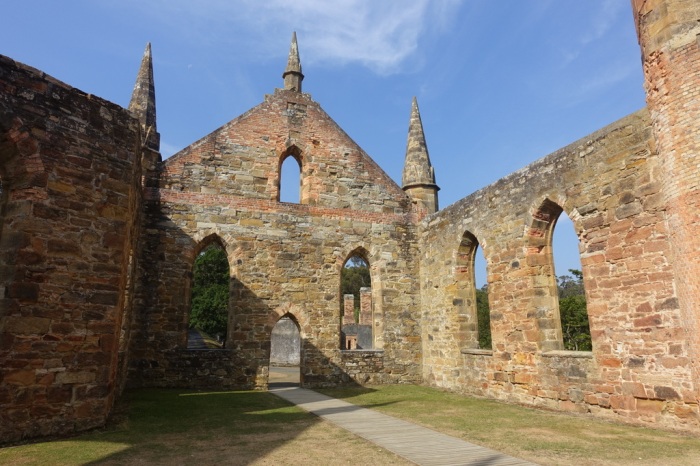 Where to Start
Getting to Tasmania is fairly easy. You can fly to Hobart (in the south) or Launceston (in the north). There is also a ferry between Melbourne and Devonport (in the north). These are all great places to start and you can either hire bicycles from these cities or have one delivered to you there. If you only have time for a short visit, you can fly to Hobart and take the ferry from Devonport back to Melbourne. Even though I had lots of time, this is what I did. You get both experiences that way.

When To Go
I cycled from mid-January to mid-February. I found most days fairly hot. Only two days were cold. I may have just lucked out, as Tassie is renowned for cold weather even in summer. The roads were quite busy until after Australia Day (Jan 26), when most of the mainlander Australians head back home and kids return to school. Bush fires in late January and February affected were I could cycle, obscured the scenery, and made the air difficult to breathe. If I were to visit Tasmania again, I’d avoid the peak season (mid-December through January). 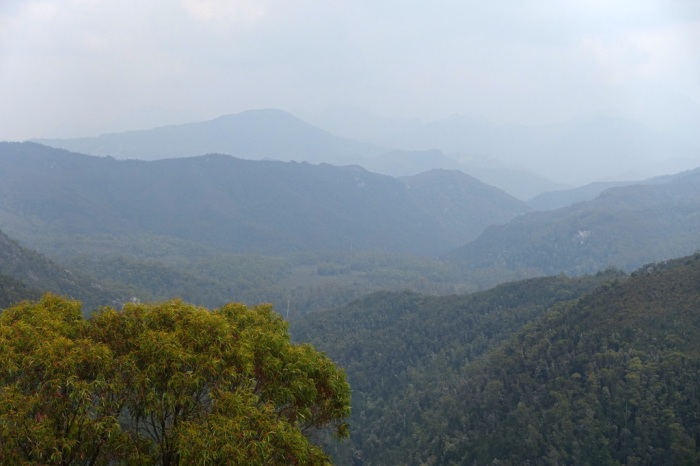 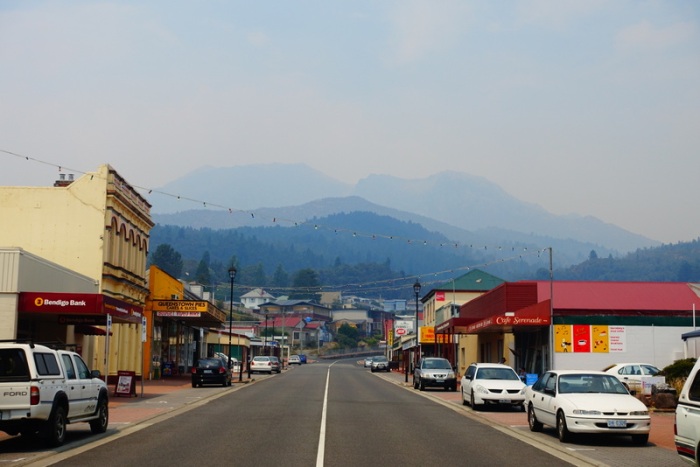 Road Kill
I was really surprised at the number of dead animals on Tasmanian roads. Sometimes it seemed like every 10 minutes I’d see a new one. It’s sad. There’s no real danger to a cyclist but the worst part is the horrid smell. You often smell it before you can even see it.

Apps, Maps, and other Resources
I bought a driving map from the tourist information center in Hobart. There is also a series of topographic maps that will give you more detail but I found the single map for the whole state sufficient.

I used the maps.me app on my phone to help with navigation and planning. It works offline and has a good set of features, but it’s not quite as good as Google Maps.

The Travelways Newspaper (available from tourist information centers) has a complete list of official accommodations. Airbnb was also useful.

I tracked each day’s cycle with strava. You can download my gps track and see the elevation profile by clicking the strava link in each day’s trip report. I’m happy to provide the gpx tracks from my trip. Just leave a comment here letting me know you’d like them.

Bicycle Hire/Rental
I hired a bike from Manfred who runs Green Island Tours. He is located about 10 km from St Helens but he will deliver a bike to you in Hobart, Launceston, or Devonport for a fee. The bike I rented was a well-maintained Merida Speeder T2. It’s heavy but sturdy. Manfred included all of the tools and spare parts that I might need. I paid $335 AUD for a one-month rental.

You can also hire bikes from Rent A Cycle Tasmania in Launceston ($10 delivery to Hobart) at prices similar to Green Island. Another option is Long Haul with higher-end bikes but it’s more expensive. 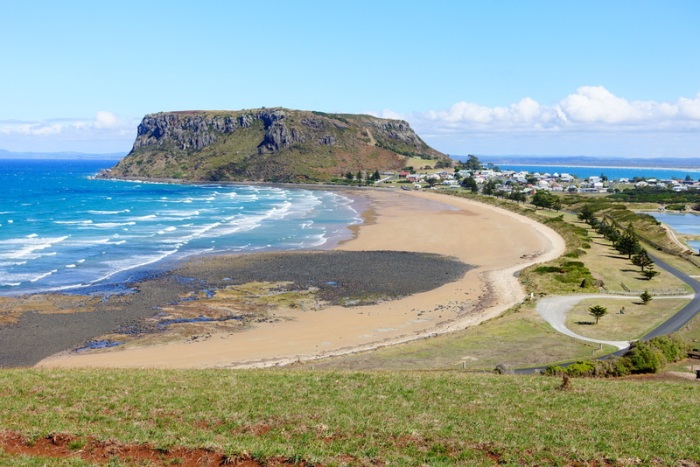 Clothing and Cycling Gear
I wore a cycling jersey, padded cycling shorts, and fingerless gloves. Be sure to wear bright colours so that you’re easily visible. Only once did I wear a jumper during the morning until I warmed up. I took a rain jacket but never had to use it. I also wore arm warmers but they were more to prevent sunburn than to keep my arms warm. On hot days I soaked them with water first to keep cool.

I picked up some cycling gear from Bike Ride in Hobart (74 Liverpool St). Tasmania is expensive in general but the customer service at Bike Ride is outstanding. 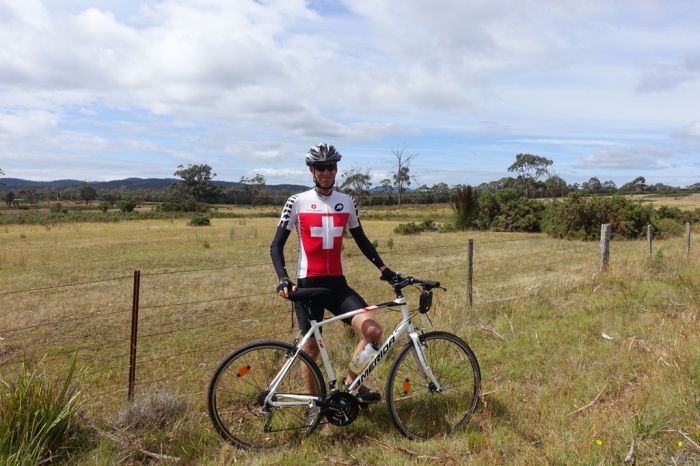 National Parks Pass
To enter any of the national parks as a cyclist, you need to purchase a pass. It costs $30 ($60 for cars) for two months. The pass is just a slip of paper that you can get when you enter any of the parks either at an information board or visitor center.

Sample some wine in wine country. Along the east coast and near the historic town of Richmond, there are many vineyards

Try the scallops, oysters, and fresh salmon almost anywhere you go, but especially along the East Coast and in Hobart.

Visit a historic mining town on the West Coast where you can live like a mine manager and tour an active copper mine.

Take a boat trip to Maria Island or along the peaceful Pieman River.

Enjoy any number of the 60 Great Short Walks in Tasmania, like Wineglass Bay or Donaghys Hill.

I hope this gives you some inspiration and some ideas to create your own cycling adventure.

Have you ever thought of cycling in Tasmania?